Arrrr! It be Arrrgust and we’ve got some special codes from Pirate101 to giveaway! To celebrate in style, we’d like you to come up with an idea for a creature or a boss fight, you can either:

– Give us battle objectives/cheats etc

– One entry per person

– Please use english so we can judge it properly

– Email all entries to admin@adventuresofthespiral.com with the subject “Arrrgust Contest”

What are you waiting for, hop to it Pirates!

The Boss I have imagined is… The Khan of the Raiders Tribe. He is a horse barbarian of level 30 that you will be able to find in the Flotsam Skyway, it will be an optional objective that will require you to have Subodai on your team and to be level 32. Quest giver- One Eyed Jack. This will be a Swashbucler only boss fight. The Khan will have a lot of health, decent damage, Vegnance Strike 3 and Repel Boarders 2. He will be followed by other horse barbarians and other Mooshoo creatures.

Story: The Raiders Tribe was a big Horse tribe in Mooshoo, that used to raid some Monk temples. That’s why the Samoorai have driven them away to Skull Island. Now, their Khan plans to strike Skull Island and make it a Horse Barbarian Island, from where to strike against Mooshoo. Subodai finds about this (through the quest you will be given) from some others of his kind, and that’s when you need to go and fight The Khan.

The Khan himself was born by the smartest Horse Barbarian of the Tribe. Being smart and powerful himself, The Khan has taken the lead of the Tribe when the old one has died in battle. Along with the new Khan, the Tribe became powerful and successful. But when the Samoorai have attacked the Raiders Tribe, most where imprisoned. The Khan and some of his men ran away on a boat and have landed in Skull Island.

The Khan’s name is unknown, not even his men know it. But what matters is that he wants to take Skull Island for himself, and the pirates will become homeless if that happens!

Madame Adria was a student at pigswick academy, she wanted to study more than what her class had to offer, her old friend Madame Vadima suggested she should research into black magic. Madame Adria refused. She went on to find something called “Shadow magic” little did she know it was more than she could handle. The shadow engulfed  Madame Adria and she was never seen again in pigswick academy. Madame Vadima now in skull island, was crystal gazing and saw herself in the shadows.. Madame Adria plans on sending skull island and everyone in it into the shadow.

Cheats: Madame Adria charms one of your companions into the shadow every 4 rounds.

They can only be released once she is defeated. 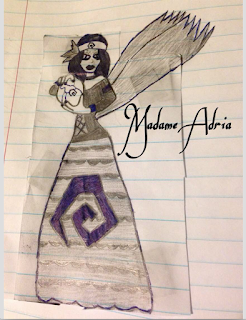 Sisters to the Rescue!

Sisters to the Rescue!