The Twilight Zone of The Spiral

You’re traveling through another dimension.
A dimension not only of sight and sound but of magic.
A journey into a wondrous realm whose boundaries are that of imagination.
Next stop, The Twilight Zone of The Spiral

*Speaks while holding lips straight*  There are those moments in our travels as pirates that things just do not go as planned. I am not talking the results of Ratbeard’s Random Number Generators. I am talking when the rules that we are used to just reverse or do something equally as weird.  These wonderful ‘glitches’ are sometimes portals to wonderful scenery, hilarious situations and as always, fabulous screenshot opportunities.Let’s take a journey into The Twilight Zone of The Spiral and see what wonders we can behold.You just never know when you will find a portal to The Twilight Zone.  That unsuspecting door to a shop or even exiting your dorm room can land you beyond the borders of reality and trapped in one gorgeous skyway. 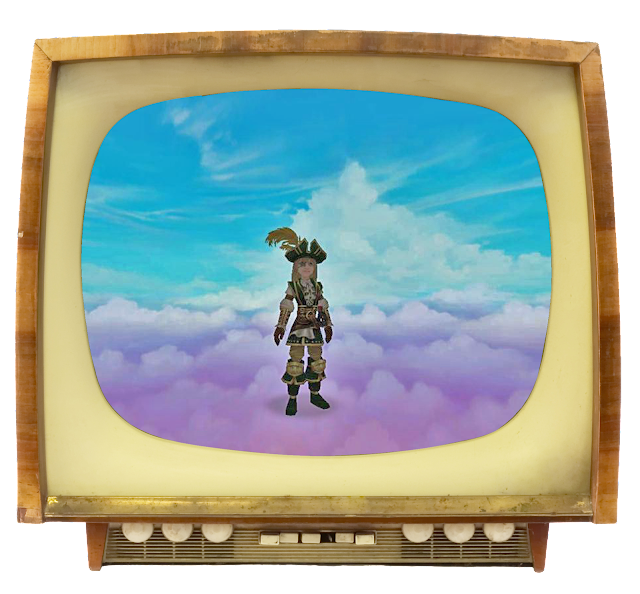 This particular glitch does not always send you to an empty skyway. Sometimes you can wind up here, fighting the urge to start singing “Under the Boardwalk” 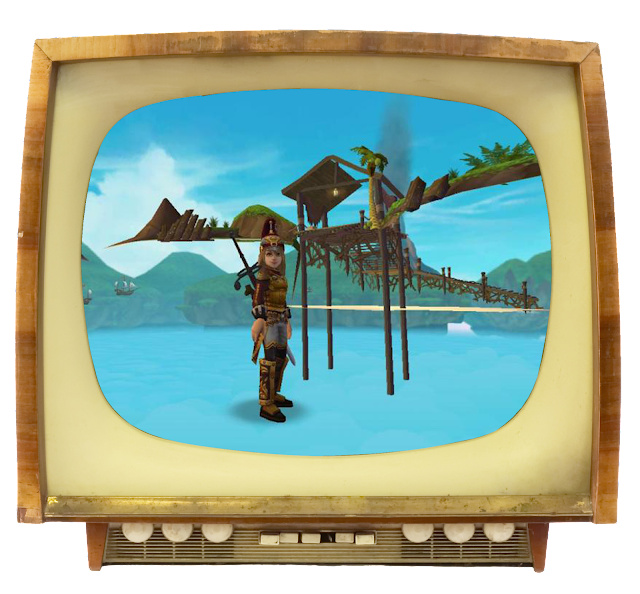 It’s not always we pirates that are affected by the oddities of The Twilight Zone.  Sometimes our companions are pulled into it’s nefarious clutches.  My poor Chilam Bak is so warped by the rift’s clutches that he has wandered off of his anchor and cannot even stand up straight.  Poor Samoorai Masamune Goto seem quite confused by his bizarre behaviour. 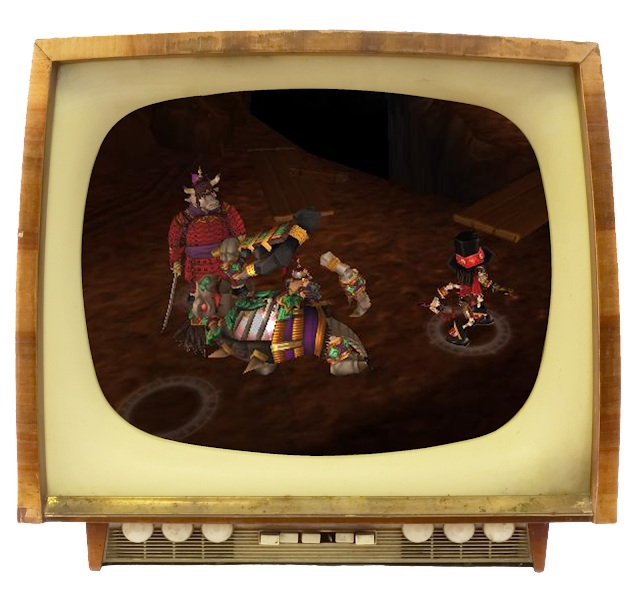 Mounts are not immune to the clutches of The Twilight Zone either. There are always places that mounts are just not allowed, like indoors or on board ships.  Not allowed except for when that magical realm of our imagination decides to mess with things a bit.  Here my leopard Dappurr is suddenly allowed access to my ship and in his excitement he tries to do some steering for himself.  He learns rather quickly that steering with your teeth is not near as easy as it looks. 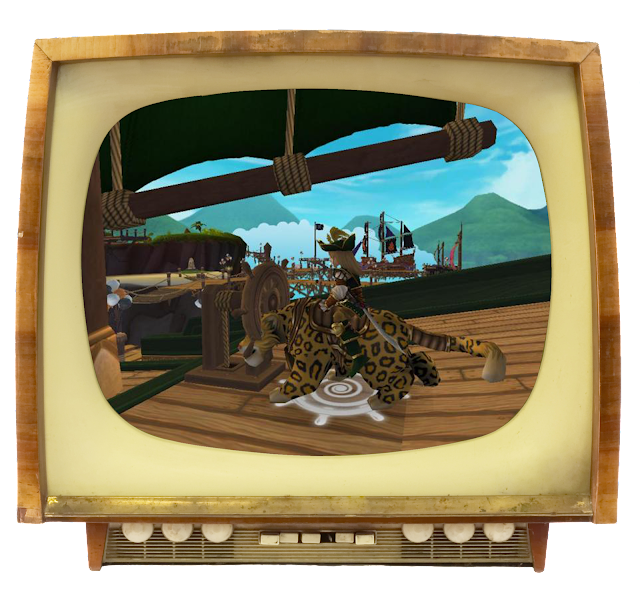 Since Dappurr survived his journey to The Twilight Zone with lots of fun memories he was well prepared when it happened to him again and he wound up inside a house.  He immediately kicked it into shenanigan mode and  made a game out of jumping over furniture.  Typical cat. 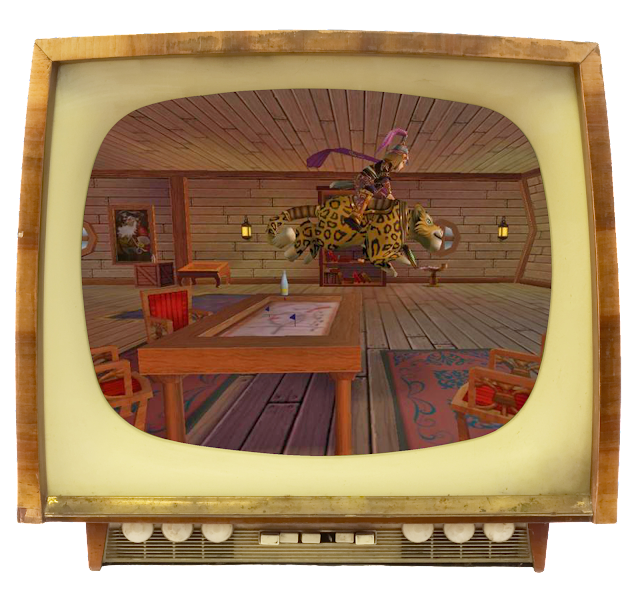 It’s not just pirates, their crew and mounts that have this mysterious access to The Twilight Zone; entire ships have been known to wander off into the alternate dimensions and actually become invisible.  Having an invisible ship does not slow Chrissy’s crew down one bit.  They prove that beyond any doubts they can float like a butterfly and sting like a bee. 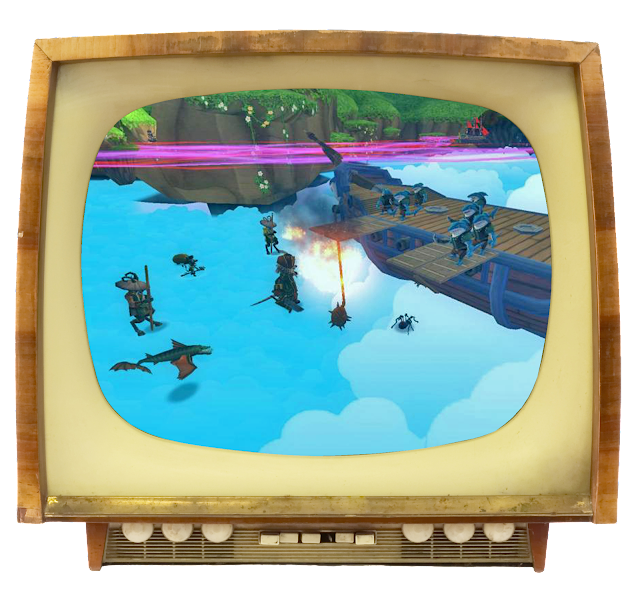 Speaking of floating, even the land itself is not out of the clutches of The Twilight Zone’s effects.  The Spiral firma succumbed to it’s magic and right in the middle of a battle we could see the wonderful world under The Spiral.  With this revealing view we also discovered that when a witchdoctor casts the spell Mournsong and that familiar Bone Dragon’s head pops up to snap its target, there was much more to this than meets the eye.  Lo and behold, there is actually a full sized bone dragon hiding underground the whole time! 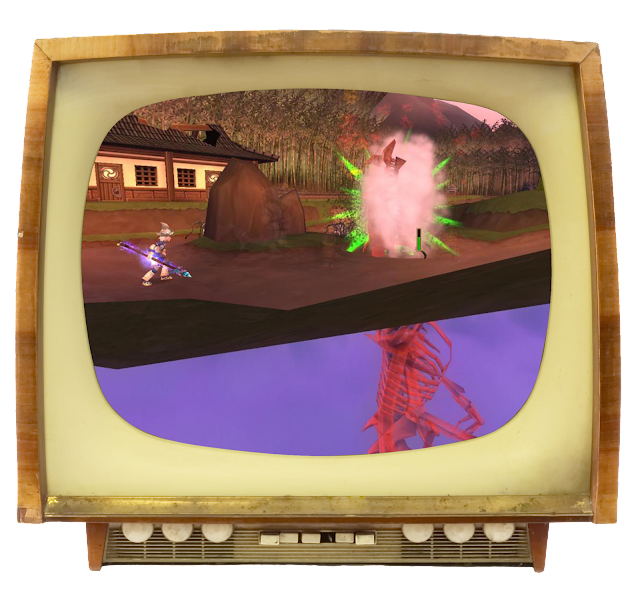 Sometimes The Twilight Zone sneaks in and catches you off guard and interrupts the simplest of tasks, like parking your ship. 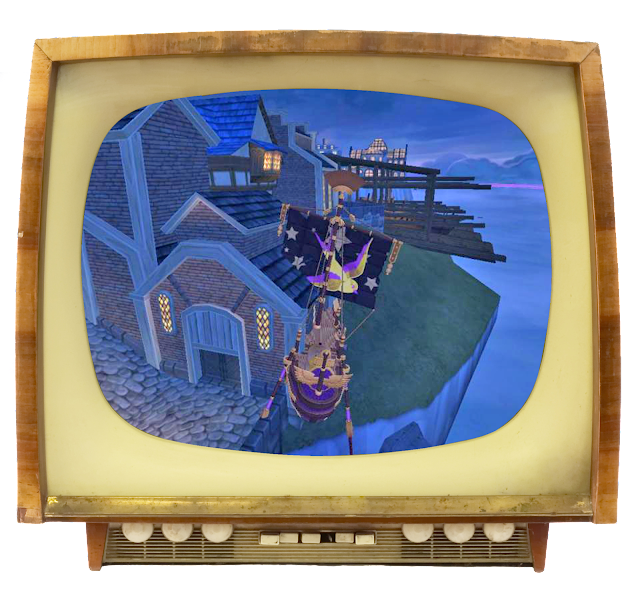 Occasionally when you go through the doors that lead to the docks, The Twilight Zone takes over and causes you to overshoot the docks completely.  I wound up beside my ship although I did realize that this particular glitch would come in handy for saving parking spaces for your fellow pirates. 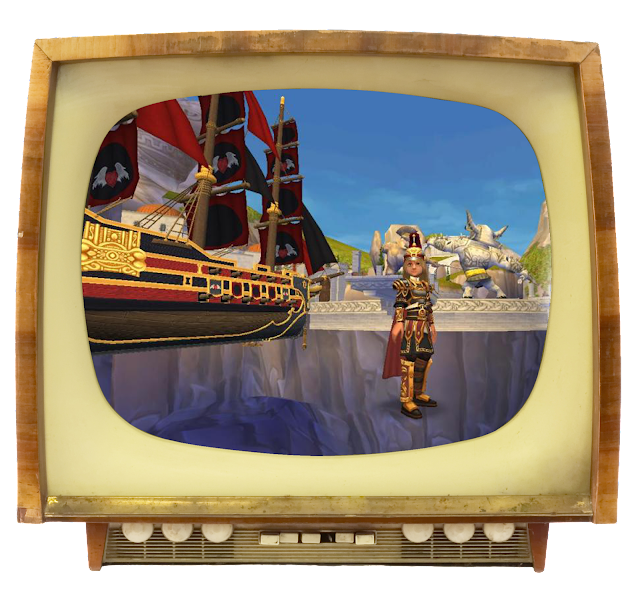 There are times when the effects of an unexpected dose of The Twilight Zone are not so noticeable yet can be just as startling.  The other day my Pegasi noticed that the solidity of his matter had become Zonified and had a blast playing Peek A Boo with unsuspecting passerby. 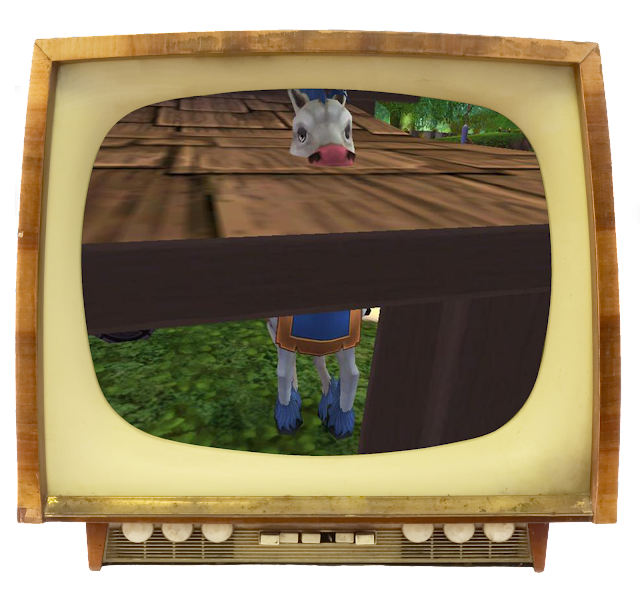 There is another type of parking issue that can happen when you get Zoned while in the middle of a teleportation to your friend from on board your own ship.  There is a tendency to double park the ships with some revealing results.  I gotta admit it was kinda unique fighting under a three quarters invisible ship. 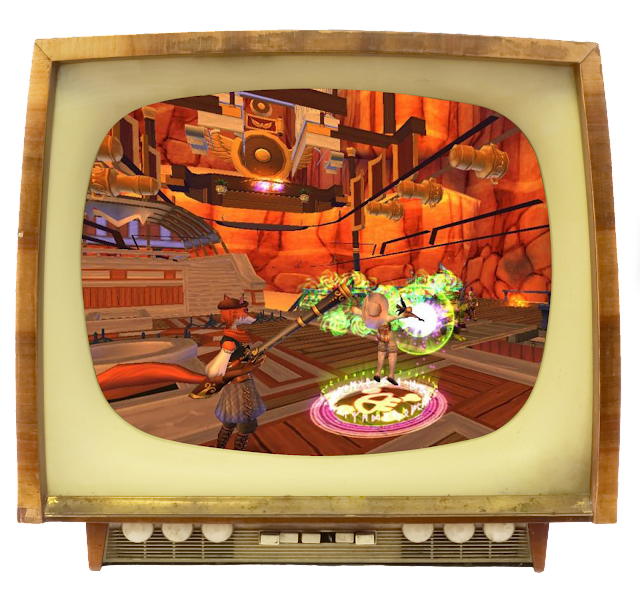 Teleportation issues do not just apply to ships. Sometimes when teleporting, you go through a wandering Twilight Zone bubble and things can go VERY wrong. 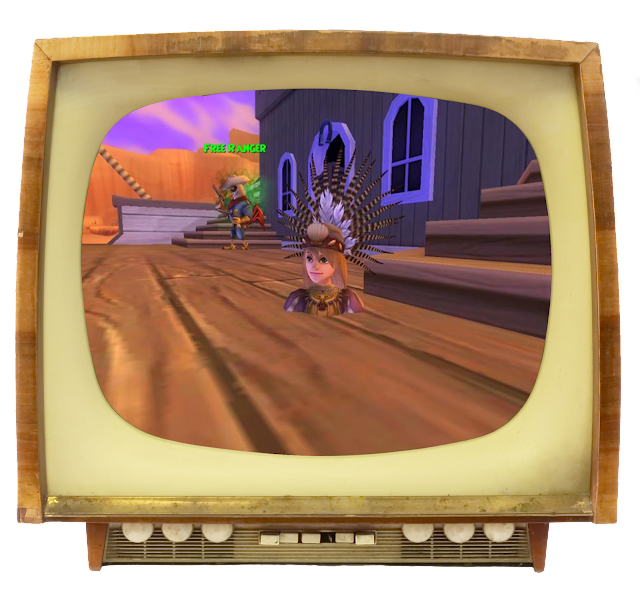 There is another Twilight Zone ramification that brings to mind a theatrical phrase.  In traditional live theater you have three sides to your stage and the audience is on the fourth side.  Whenever the actors break character (whether it is in the script or not)  and address the audience, it is called “Breaking the fourth wall”.  Getting Zoned while fighting in close quarters can cause this to happen and you get to see the world around the “Stage” as The Spiral’s fourth wall is broken. 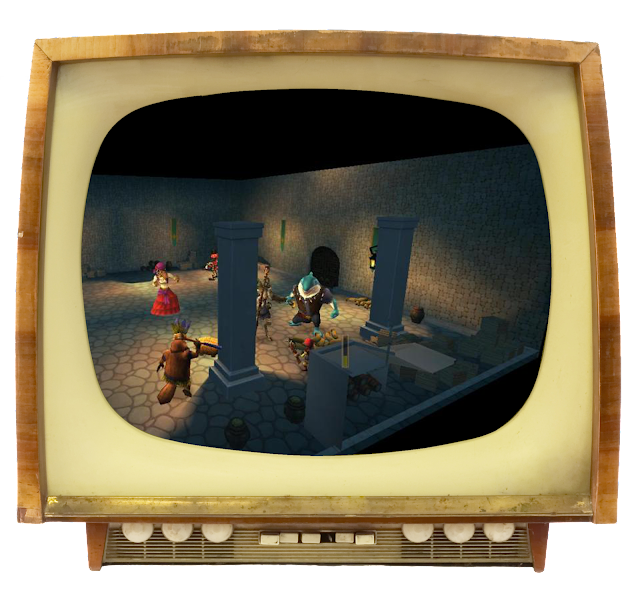 Occasionally The Twilight Zone only affects part of whatever you are doing in The Spiral.  It can be a bit unnerving to come through a Zone tainted stormgate and realize that you arrived without your ship. It is quite embarrassing to have to explain to your passengers how your ship went AWOL. 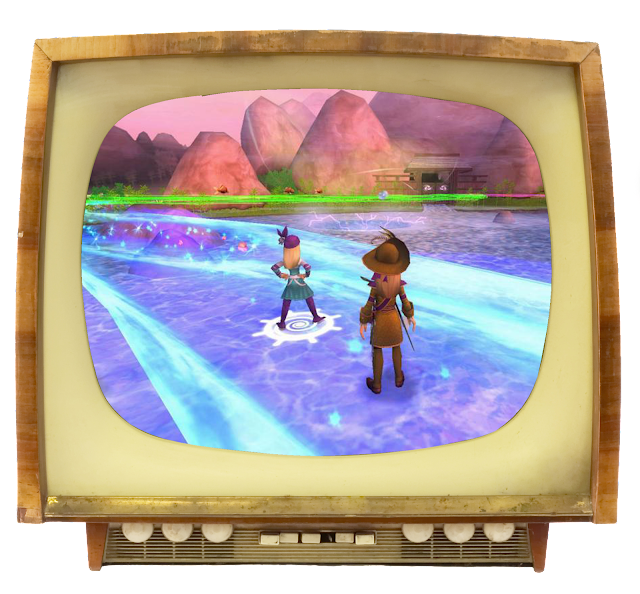 The Twilight Zone can even mess with parts of your ship. It the following instance my ship’s horn was what got zapped by The Zone and it caused my Mount Vesuvius to be, shall we say, a little tipsey. 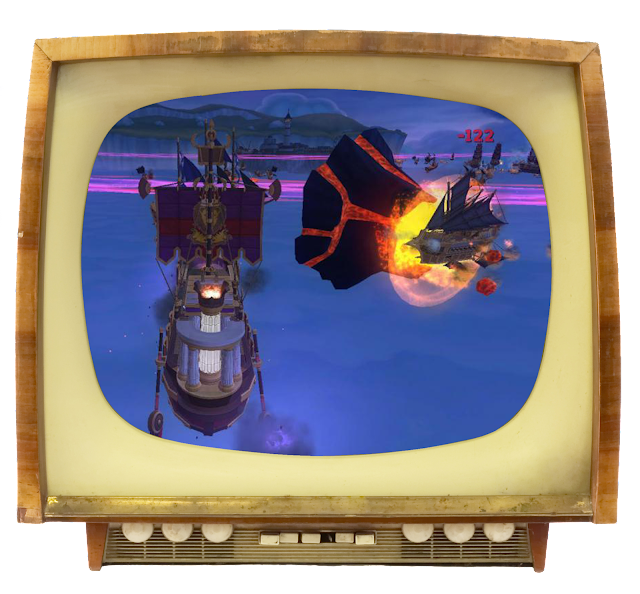 Having a lot of encounters of the Twilight Zone sort can sometimes be a bit taxing on your average pirate. Sometimes a Zone rift happens, you get lost in your thoughts and it can make you feel a bit like an airhead. 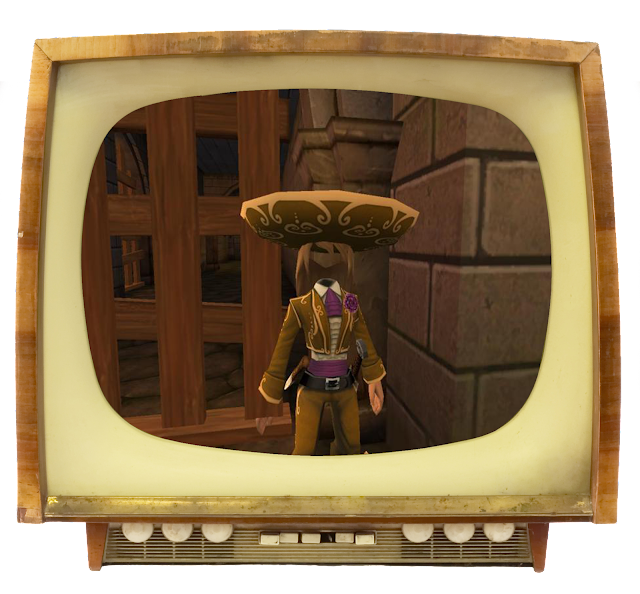 Many times trips to The Twilight Zone can be very educational and can reveal many mysteries.  Going through The Zone on your ship can sometimes land you in unexplored areas and reveal the much talked about lower decks that we normally never have access to. 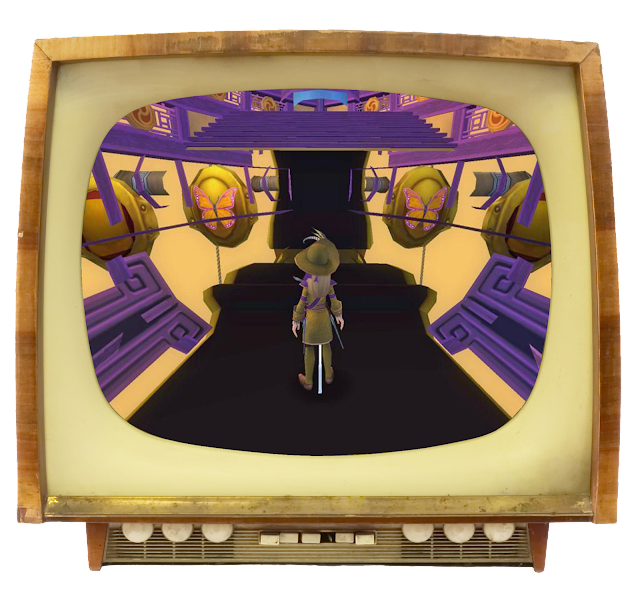 Having experiences with these glitches are not all weirdness and being stuck in places. It is a wonderful time to explore strange and beautiful areas of the game that are never meant to be seen by your average player. As this post illustrates, it also makes for some really awesome screenshots.  The sheer beauty and wonder can give you a warm fuzzy glow that can last for some time, complements of The Twilight Zone of The Spiral 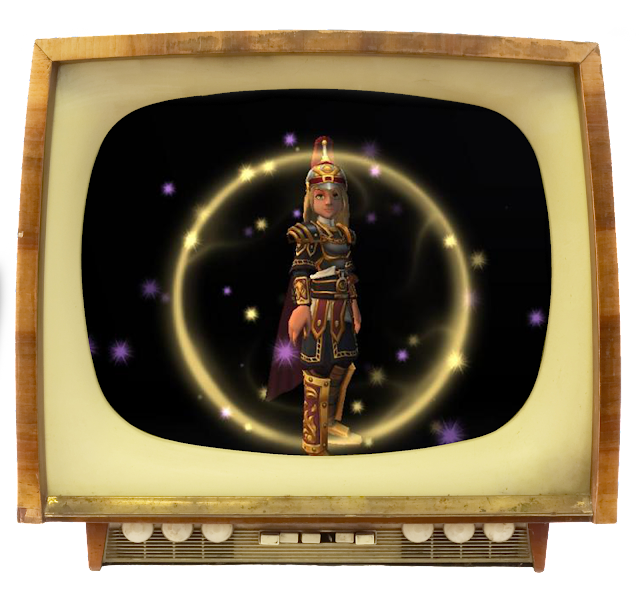 Blessings and giggles on your day

The Sharks and the Plan